I started working on Bazik in 2014 because I couldn’t find software that was simple and accessible to bring my video mappings to life with a nice audio reactive.

For 2 years, driven by enthusiastic users feedbacks, I improved the software to the point where I “got the job done”. You should know that developing PC & MAC software alone is a hell of a job, and I was satisfied with the result. A simple and powerful tool, with its own style.

Seeing over the years new talented developers and new teams coming up with software, I told myself that Bazik had inspired people, and that others would do better soon.

The only thing I regretted about the technology I was using was the difficulty in integrating user-created content and update the software. Indeed, C ++ is very powerful, but it is a compiled language, so it is complicated to load external files. I had found a solution with GLSL Shaders but it must be admitted that it is not at all intuitive to use, even with a good technical skill.

Now in 2021, I realize that Bazik is still in use, and that there is no convincing alternative. So to take up the project as a challenge, I’m going to try a new approach, with a new language. I hope that it will give a new relevant tool, in the same philosophy, but in a renewed style and with the possibility of easily adding content.

Theorie is a techno party mixed by Steeven B at Studio Saglio / Strasbourg / France.
Bazik is running all night long stand alone and generate visual in real time, projected on a semi transparent screen for a really fun hologram effect.

Bazik was create as a visual plugin for this type of vj software, and it’s really cool to have some feedback and support.

“We just had an excellent time playing around with Bazik. All of the fun of generative visuals, with a simple interface that was designed with performance in mind. Well worth your time !” Resolume team

END_OF_DOCUMENT_TOKEN_TO_BE_REPLACED

This week, I have spend time in completly refound the 3D light system to be most efficient and very light.

Bazik is now running like a charm in a old Macbook (2007 – Core 2 Duo – 2 Go Ram) with HD output. The program is low CPU consumption but very powerful.

My priority has always been that Bazik be usable by the largest number of users easily. Therefore the engine must be efficient, even on an old machine. It also allows advanced users to use multiple versions of Bazik simultaneously to create unlimited possibilities. With its new Open GL well optimized engine, you will be able to have fun without exhausting your computer !

This leaves me time to test and fix bugs, and work on tutorials & support.

After the launch, I will start working on PC version. 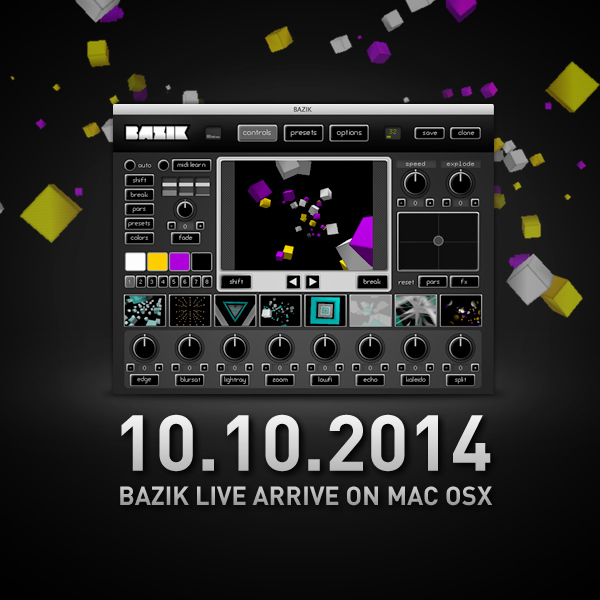